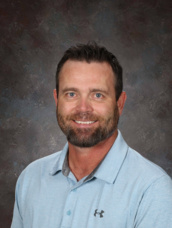 Dallas Hacker was born in a suburb of Chicago. However, he has lived in Colorado most of his life. Dallas graduated from Strasburg High School, so he can easily relate to the rural area and smaller school. After high school, he earned his bachelor's degree from Chadron State College in Nebraska. Mr. Hacker also holds a master’s degree in Educational Leadership and Policy Studies from the University of Texas at Arlington.  He has three children, Payton, Liberty, and Marshall who attend school at Byers.

In his “spare time”, you will find Mr. Hacker chasing his kids around sporting fields or courts, working as a guest relations supervisor for the Denver Broncos, and as a field security guard for the Colorado Rockies. These are great jobs for a sports nut! He was the assistant coach here at Byers for 16 years, but has pursued his passion to become a head coach in a neighboring district.

Mr. Hacker enjoys working at Byers Elementary because the atmosphere, “just feels like family.”  Teaching in Byers for 18 years, his favorite part is watching his fourth graders graduate from high school and become successful adults. His goal is to touch the lives of his students in a positive way